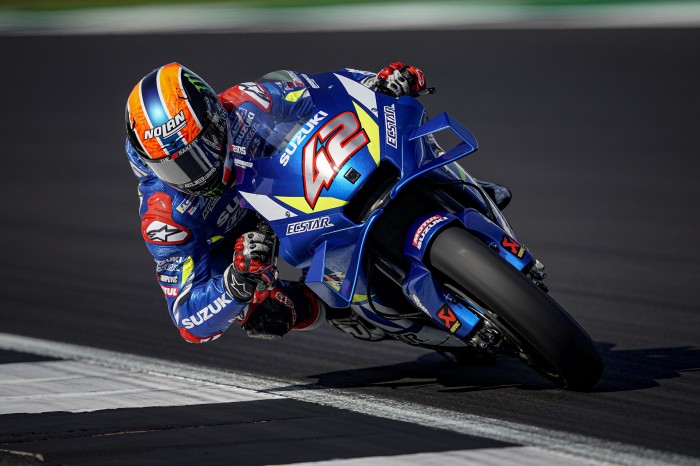 Ecstar Suzuki rider and British MotoGP race winner Alex Rins was delighted to claim his second win of 2019 after what he called a ‘crazy’ race at Silverstone.

The Spaniard started from the middle of the second row in fifth position and enjoyed a good start, coming out of the drama in the opening corner in third place behind Marc Marquez and Valentino Rossi.

It wasn’t long before Rins moved past the Italian into second place, and set about a race long battle with Marquez, one he would come out on top of, overtaking the Spaniard on the final corner, crossing the line just 0.013 seconds before Marquez.

Rins explained that he was lucky to get out of the first corner, but once he did and went with Marquez, he knew what he plan was and executed it perfectly.

“Then we start to play a little bit, Marc closed the throttle, I was riding one lap in front of him, but very quick I let him past, as he was faster than me on the last sector. I don’t want to show my weak points.

“But in the end, on the last lap I was recovering a lot of time to him, and I did a very big mistake two laps before the end, when I thought it was the last lap and I was trying to overtake him on the outside. Then when I saw him going full gas, I say, Alex, one lap remaining, you need to go to him. It was a unique point the last corner to beat him.

When asked about the two wins, Rins said: “The two victories, Texas and this one was difficult for sure.

“I didn’t plan to win the race, because Marc and Fabio has more potential than us, and also in Texas, Valentino was Valentino and Marc, he fell down, they were faster than me. But I arrive at one point on the race, I was feeling very comfortable behind him.

“I was riding in a good way behind him, so like this I was trying to play, just took one chance to win on the last corner and it was like this.”